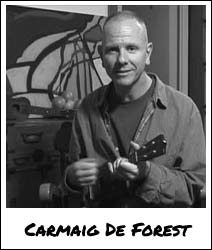 It's 2003 and the California-bred, ukulele-playing punk-folk-singer-songwriter-storyteller-performance-artist Carmaig de Forest can be found thriving in Baltimore's creative underground, Canada's eclectic festival circuit, popping up on stages just about anywhere, and on the CD players of discriminating listeners everywhere.

In 1982, a young Carmaig -- fresh out of UC Santa Cruz's experimental Theater Arts program -- began wandering between San Francisco and Los Angeles with an amplified ukulele and a set of vitriolic anthems. The post-punk scene took notice and word spread. The Violent Femmes took him out on the road. Alex Chilton took him into the studio with a crackerjack rhythm section (with Chilton himself playing guitar) to produce I Shall Be Released Carmaig's 1987 debut album (jointly released by Good Foot and New Rose Records).

With an LP to promote, Carmaig formed DeathGrooveLoveParty-a loose-knit combo of L.A., New York, and Bay Area musicians assembled in various configurations for various tours. Mr. Chilton's arrangements soon melded with the punk and other underground rock sounds that have long been an inspiration. Carmaig began to teach himself how to play guitar and new songs arose. By then Carmaig had settled in the San Francisco Bay area where he began working on the material that was to become El Camino Real.

Carmaig took a break from DeathGrooveLoveParty in the mid '90s. He began work on a series of songs about California and performing these strange and intimate tales as a one-man show -- alternating between electric guitar and his trademark uke for accompaniment. Taken with this new work, micro-label St. Francis Records sent Carmaig to Toronto to record with longtime fan and touring partner, Bob Wiseman. With Mr. Wiseman providing a different sort of strange and intimate aural landscape for Carmaig's tales, the fruit of the sessions is the CD, El Camino Real.