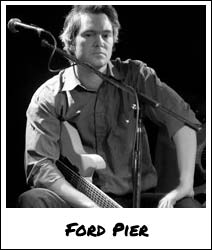 Our story begins as Ford Pier emerges fully-formed from the skulls of a music teacher and a librarian in Boston, Massachusetts some time last century. One day, while the maternal figure is watching the Watergate coverage on television, he overhears Walter Cronkite's words "...Ford is now president," and bursts into tears, crying that he's not ready for the responsibility. The family moves to Edmonton, Alberta in Canada soon after.

OK skip ahead. over the next not-so-few years Ford played in a whirlwind of memorable Canadian bands, just check this list: Jr.Gone Wild, Roots Roundup, The Showbusiness Giants, The Tonics, Tankhog, The Hardrock Miners, and D.O.A. to name a few. Since 1996 Ford has been the guitarist for Vancouver songwriter Veda Hille, and has, since 1994 had the same superlatively capable rhythm section for his own live performances and these would be fellow ex-Roots guys David Macanulty on Drums and Keith Rose on Bass.

On his Sudden Death release 12-Step Plan, 11-Step Pier Ford Pier stitches together a lurching, howling frankenstein's monster of a record from the deseased tissue of all conventional musical forms.