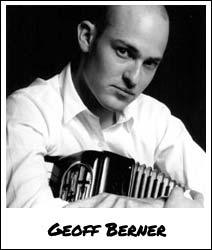 Geoff Berner writes peculiar, witty, sometimes heartbreaking songs with way too much insight into human nature. When he sings them, he stands alone on stage, playing his accordion, Estella. The music is a unique mix of folk, punk, and klezmer. The effect can be at times haunting, confrontational, or just absurd. Sometimes all three at the same time. "I play accordion.” the Vancouver native says, point blank. “I make no apologies for it. It’s part of my heritage as a Jew of Eastern European descent. I choose to present my songs this way.” In spite (or perhaps because) of his unorthodox aproach, he ’s doing well, earning a living as a traveling, recording musician. Following the release in 2000 of his debut EP "Light Enough to Travel” on Sudden Death, he’s toured Europe 4 times, played at over a dozen Canadian folk festivals (The Stan Rogers Festival,Calgary,Vancouver and Rootsfest among them) and performed throughout the U.S., including Seattle, San Francisco, L.A.and N.Y.C. Radio and television appearances have included interviews on CBC’s “Richardson’s Round-Up" and “Radiosonic ”, CBC-TV’s “Zed TV ”, Norwegian National Radio, Czech National Radio, and Slovenian National Radio.