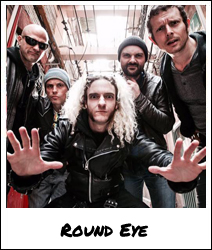 Round Eye, the experimental, sax wielding, freak punk outfit have accrued a loud and controversial name for themselves since forming in 2012. The Shanghai based group have shown no mercy nor fatigue in sound development or work ethic and have as of late been a crucial force in bridging a wide gap between the eastern and western hemispheres of DIY punk rock. Along with blazing a trail all over the globe they’ve played host to visiting western punks and some legends as well sharing stages with acts such as The Fleshtones, MDC, Mike Watt + The Missingmen, D.O.A., The FUs, The Boys (UK), Paul Collins Beat, M.O.T.O., Ceremony, Iceage, and eastern notables such as P.K.14, SMZB, SUBS, Hang on the Box, members of Carsick Cars and Joyside and Misandao and during a mainland tour of China with UK punk legends The Boys, they were forced to literally move the tour underground after being banned by the Ministry of Culture for lewd artwork on a tour poster. VICE magazine documented one of their ‘bunker’ gigs in Beijing in glorious baijiu filled detail.

They have drawn comparisons to the Stooges, Captain Beefheart, Dr. Feelgood and The Fall but have more often fallen into a category all their own. This Spring has Round Eye touring the Chinese mainland supporting Mike Watt + The Missingmen whom they are recording an EP with set to be released in 2017, making their second appearance at Taiwan’s biggest music festival Spring Scream and hitting Europe and the UK for a 60+ date tour supporting their Sudden Death Records debut Monstervision.