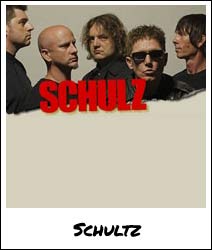 SCHULZ is the new blastingly powerful musical creation of Guenter Schulz (ex-KMFDM) and Jeff Borden (House of Commons.) Combine Guenter's heavy guitar riffing (he is thought by many to be the top guitarist in industrial rock) and Jeff's incisive street level lyrics and you have a potent brew that smashes into your consciousness.