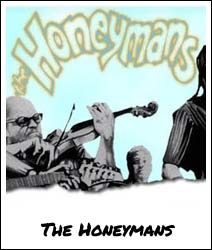 The Honeymans are an ambitious, hardworking band whose eclectic, manic mix of Celtic rock and Chili Pepper funk defies description…

The lyrics project wry, colorful images that are good natured and sincere; the golden poetic scope of Gordon Lightfoot filtered through the streetwise tongue-in-cheek viewpoint of Tom Waits. Rhythmically, at one moment projecting the joyous Hibernian traditions of good-time jigs, at other moments coloring the backbeat and rhythms with the proud, mournful Eastern European minor-scale melodies of the Gypsies. All founded upon the concussive whack of John Bonham one minute and the tasty flash of Buddy Rich the next.

Originally (1996) it was Mike and Kevin playing local coffee houses and smaller shows in Kimberley. Ben Dunn saw them at a show in 1997 and knew instantly that he was going to play with them even though he hadn't even met them yet. They then started playing smaller bars. The first one was a place called "The Hosmer Inn" in Hosmer, BC, producing Hosmer's first traffic jam (population 42). Neil played a set with them at this show, as well as recorded two songs on the first CD in the summer of 1998, then joined the band full time in November 1998. Since then, the band has been a full time touring act and has performed over 300 shows in 7 countries.

Mike Honeyman picked up the electric bass during junior high. Inspiration from such diverse groups as Nomeansno and Metallica moved him into serious musical exploration from the age of 18. As one-half of the Honeymans' rhythm section, Mike's rolling bass lines switch moods - from following Kevin's bright guitar rhythms to looping, individual melodic counter lines.

Kevin Honeyman, draws as much influence from the emotional post-hardcore frenzy of Fugazi, as from the up tempo skanking groove of the Specials. Armed with his homemade half-brown, half-orange amplifier, Kevin is as at home with choppy ska rhythms as he is with crushing power chords.

Ben Dunn's first encounter with percussion began at age four with a kitchen-floor experiment involving pots, pans, and chopsticks. After a smoke-damaged Baxter drum kit was presented to the Dunn household as a Christmas gift, young Ben was suitably motivated to bigger and better instrumentation. Seminally influenced by the orchestrative percussion of Primus' Tim "Herb" Alexander.

Neil MacDonald is the last pillar of support underneath the Honeymans' sonic platform. He began playing violin at age twelve, influenced by a cousin of his father's who was a fiddler and a luthier. The self taught fiddler brought a new dimension to the band with his folk and Celtic influences.