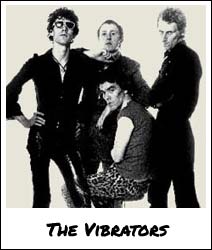 With a career lasting twenty-nine years, vocalist/guitarist Ian "Knox" Carnochan, bassist Pat Collier, guitarist John Ellis and drummer Eddie originally formed the Vibrators in February 1976, and their first gig was supporting The Stranglers at Hornsey Art College in North London. They supported The Sex Pistols at the 100 Club and were one of the bands playing at the now legendary 100 Club Punk Rock Festival where, as well as doing their own set, they supported guitar hero Chris Spedding. Chris recommended the band to his then record company, RAK. The band's debut single "We Vibrate” came out in November (one of the first punk singles) and was followed two weeks later by Chris Spedding’s "Pogo Dancing" single with the Vibrators. Early in 1977 the band supported Iggy Pop (with David Bowie on keyboards) on a UK tour, then moved to Epic Records and released the classic "Baby Baby" single, followed by their first album "Pure Mania” which spent five weeks on the UK Top 75, peaking at number 49.

Now the band celebrates twenty-nine years of making records and touring heavily. Get ready for another 29 years of pure mania!