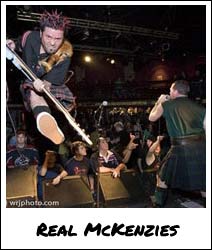 The modern-day Celtic bards known as the Real McKenzies hail from Vancouver, BC and are a punk band deeply rooted in their Scottish heritage with a sound best described as the Sex Pistols meet Scottish folk legend Robbie Burns. The Scottish term Ceilidh (pronounced kee-lee), is the main reason why the Real McKenzies formed and their chief inspiration. Ceilidh, according to the McKenzie, is a Gaelic word meaning “A wicked party which carries on for days”. Founded by frontman Paul McKenzie in 1992, he cites his family as another motivating factor, “As a lad, my parents and grandparents would dress me up in a kilt and make me sing and dance to traditional Scottish music. Starting a Scottish punk band is my way of getting revenge!” You’re probably wondering how it is that a group of Canadians can rightly rollick and roam the countryside in the name of Scotland. Paul offers an explanation, “A great many Scots immigrated to Canada. Ya see, the Scottish went north and the Irish went south...as they often do.”

TRM are proven warriors of the road, having toured North America six times and Europe (where they draw huge crowds) five times. They’ve toured and played shows with Rancid, Shane MacGowan, NOFX, Flogging Molly, The Bay City Rollers (yep, it’s true), The Briefs, and many more. Always touring, always drinking, and always rockin’, the haggis-fueled McKenzie clan is hearty bunch that desires only to bring their brand of Celtic punk rock to every remote corner of the globe. Dirty Kurt puts it best, “We’ve been through tons of members, tons of broken bones, and tons of beer.” Their unending tour schedule would make William Wallace himself exhausted. 2003 is shaping up to be a banner for the ‘Kenzies as they played over 30 sold out shows on the North American Fat Tour.

Always performing in full Highland regalia, the Real McKenzies are a true credit to their ancestors. For their live show they don kilts, high stockings, and sporrans (those weird belt thingies). You have to experience the a live McKenzie show to see it’s not entirely traditional, but hands down the rowdiest punk show this side of Glasgow! These inclusive punks see to it that everyone has a good time and a stiff drink in their hand.