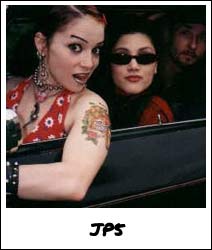 Formed in January of 1995, JP5 hit the clubs of Vancouver, BC, with a message to its fans... "PUT UP, OR SHUT UP!" These outrageous, over-the-top power punk rockers have been shocking fans with a stage show 'Not for the faint of heart'. JP5 is fronted by Lotuslands's most popular trash vixen, Gerry-Jenn Wilson. A talented songwriter and an even more amazing performer, Gerry-Jenn describes JP5 as "Jet fuel, my fave martini, and my beloved rawk band!" It doesn't take long to see that this woman has a spark inside her that is a mixture of Wendy O, Iggy Pop, Betty Page, and a little bit of Alice Cooper.

Working with some of Vancouver's best musicians has given JP5 the opportunity to play some fabulous shows with bands like THE HEADSTONES, THE HUMPERS, NASHVILLE PUSSY, and DOA to name only a few. JP5's members also have an impressive track record having played in such bands as BLACK EYE BUDDHA, THE REAL McKENZIES, THE MUSCLE BITCHES, CURIOUS GEORGE, FACEPULLER, SPANK MACHINE, DEATH SENTENCE, TANKHOG, KREVISS, SLOW, SNFU, and DOA.