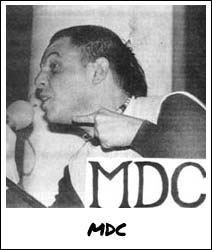 The old school punk rock band M.D.C. is back with their 7th full length album with three of their four original members Dave Dictor (also Submissives), Ron Posner (ex-con-ron), Mikey Donaldson (founding member of The Offenders and Sister Double Happiness) and drum sensation Mike Pride (Dynamite Club). Magnus Dominus Corpus is a Latin term taken from the returning Crusaders of the 13th century to term the intense hatred between the clashing Islamic and Christian cultures. Literally, corpses (rotting dead bodies) of the ultimate dominators. This album debunks the world of George W. Bush taking to task his utterance of the USA going on a modern day crusade against the Islamic terrorists. This album was internally called Millions Of Dead Contractors but out of respect for the foolish dead men’s loved ones we went back to the roots of our culture clashes, the Middle Ages and their Crusades.

This 18 song hard hitting release of over the top social and political songs containing the wry wit that has been the trademark of M.D.C. since its 1982 debut album Millions of Dead Cops. New songs, about George W. and his crooked cronies plans for Destroying The Planet, the idealistic plea for us to Sleep A Little Less, Dream A Little More, poseur Punk about the scene hipsters and their fashion rules, Long Day, Short Life about Dave’s childhood friend’s father’s advice after his long work day, and Founding Fathers Terrorists Or Freedom Fighters which suggests we take a closer look at history and what defines a terrorist or a freedom fighter and much, much more.

This release really rocks with raw passion and hard hitting hardcore from some of the earliest creators of this genre. So give a good listen to M.D.C.’s new album and check them out live on tour on four continents for the new year.